When I was younger my Mother introduced an allowance; this was a monthly amount I was given like pocket money for my spending. Other children saw my allowance as high in comparison to their pocket money but whilst Mum still covered any school essentials and the difference between a normal pair of trainers (if I needed them) and designer ones, essentially the allowance was for everything!
Other children were handed pocket money but still had all their clothes bought for them and were given extra money for days out whilst I wasn’t. My mother was always flexible so I rarely went without. She offered extra jobs or an advance if I wanted something immediately; there was usually an option but it involved me having to think about my spending. I enjoyed the responsibility and freedom my own money gave me because my Mum didn’t interfere with my choices. As a parent I realise she taught me essential financial skills, budgeting and the value of money using this system and hope to do the same for my children in the future.
At 6&8 I still feel Master and Madam are too young for an allowance and that much responsibility but I do want to begin teaching them the value of money so give them a small amount of pocket money each week. Unfortunately pocket money had become a tool for threats, bargaining and bribery in our household and really wasn’t teaching any important or realistic values. Added to this was my forgetfulness and then guilt which meant they often got a lump sum when I remembered, probably more than I had intended to give initially. 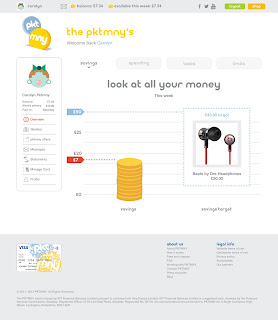 My pocket money system wasn’t working; I wanted my children to have a ‘place’ for their money so they could decide whether to spend or save. When I was introduced to the idea of a new website for managing my children’s pocket money I was more than happy to trial it. PKTMNY allows you to pay your child a set amount into their account via yours on a specified day every week. Children have their own account where they can see their money adding up on visual charts. They can set savings targets and wish lists whilst you can set them tasks for extra jobs. Plus they get a debit card to use with their account!
Because mine are at an age where they are tempted by adverts for toys or memberships that I often feel won’t last the long-term I regularly find myself refusing things. I want them to occasionally be able to make their own choice when they feel they really want something that I don’t like. Now they are given a small amount of money a week and can see exactly how much they have to spend they can choose if they really want to buy or save for something.
Madam loves having money but doesn’t ask for much so after the initial excitement of buying a makeup set on her own card she has left her money to add up. E is the opposite, he is always after something and money burns a hole in his pocket! PKTMNY has really helped him to understand his spending and is already altering the way he handles his money. Initially he bought a membership for an online game for a month which he was pleased with but after looking at his account remarked that in future he was going to try and save a bit. Neither of us had noticed that his one month’s membership renewed automatically – first important money lesson learnt!
He has now set a savings goal and is slowly edging towards it. Occasionally he can’t resist something but now sees the implication it’s having on his ‘big goal’. I am no longer using pocket money as an idle threat but instead a tool to teach them to save and value money a bit more. Giving them choice and freedom with their pocket money has already reduced moods and sulking when I refuse something in a more positive way than threatening to withdraw pocket money had ever improved their behaviour!
Sponsored Post
This post is part of a project with BritMums, sponsored by PKTMNY, highlighting it’s launch. The new tool allows parents to easily pay and monitor their children’s pocket money online, whilst allowing their children to earn, save, spend and manage their money in a totally safe and fun way.

6 thoughts on “Teaching the value of money…”

We use cookies to ensure that we give you the best experience on our website. If you continue to use this site we will assume that you are happy with it.Ok